About Lynn Fellman – Artist for Genomics

I’m an artist who writes and draws about the science of our magnificent genomes. 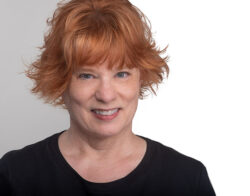 I’m Lynn Fellman – Artist for Genomics and owner of Fellman Studio Inc. Use this form to contact me.

This website has SciArt from 2005 to 2020. Please visit LynnFellman.com to see my current projects.

To purchase my SciArt, go to my online store for fine art prints, books, and DNA-themed cards.

I’m grateful for the many opportunities to work with amazing people at the universities, foundations, and institutes that have supported my work.

As a Fulbright Senior Scholar to Israel, I worked with Dr. Dan Mishmar, an evolutionary geneticist at the Ben-Gurion University of the Negev, to develop an animated video about his research.

Another opportunity came from the National Evolutionary Synthesis Center (NESCent). It was a National Science Foundation think tank for innovative, cross-disciplinary, evolutionary research at Duke University. I was granted a six-month residency to develop interactive media about genomics and human evolution.

During my residency at NESCent, I was in a working group led by Dr. Nina Jablonski and Dr. Henry Louis Gates Jr. We developed curricula for middle school students connecting their genetic ancestry with family history that received funding from the National Science Foundation (NSF) and Robert Wood Johnson Foundation (RWJF).

The grants led to several successful, ongoing programs: the “Genetics and Genealogy” curricula for undergraduates at Spelman College and “Finding Your Roots” summer camp for teens at Penn State University. I designed interactive media for the programs: a digital book for Spelman and a visualization tool for Penn State.

“Skin We Are In,” a book about the evolution of human skin color, is another collaboration with Nina Jablonski. It’s an illustrated story with the science written by Nina and artwork by me. Available from Amazon.

Geneticist Perry Hackett is my mentor, checking my work and guiding me to experts and resources. Anthropologist Irma McClaurin championed the University of Minnesota commission for my DNA Portrait Exhibit.

I’m a member of the National Association of Science Writers (NASW), the Philosophical Society of Washington, D.C. (PSW), and the American Society of Human Genetics (ASHG).

Proud to be one of the founding members of the Genome Writers Guild (GWG) — a scientific organization building a better future for humanity through genome engineering and public outreach. 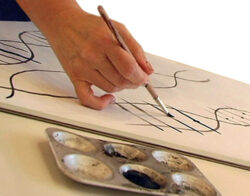 My work begins with an idea sketched on pencil and paper, developed further with ink and paint. Then I digitize sketches and paintings and manipulate them with digital tools.

When printing the finished image, I use 100% cotton archival paper and pigment inks for vibrant color and longevity.

Because genomics is the transformational science of the twenty-first century. It’s key to mitigating the planet-wide damage we have wrought. Think climate crisis — floods, fires, drought, and pandemics.

Genome engineers are helping plants, animals, humans — all living beings — to adapt to the changing climate with editing tools such as CRISPR. What began decades ago as obscure basic research laid the foundation to rescue millions of us with the mRNA vaccines.

Why care about genomics? Because we’re all Genome Explorers now. We’re the first generation to have access to our personal DNA. We’re a vanguard of first-time explorers, learning about our magnificent genomes together.

Genomics is personal. You and your DNA are protagonists in the unfolding story about your unique biology. Understanding your data becomes vital to your health and family.

As research uncovers new variants, your genome story will expand with the latest information. It could reveal unique variants that could save a life, maybe yours. Genome Explorers like you can demand ways to protect and share your data wisely. Your knowledge has the power to push medical practice to advance faster.

Finding the wonderment. There’s more to discover than something scary like a misbehaving APOE gene. Our genomes have regions where wonderment can be found.

There are dark zones with quirky genes that jump. Other genes have variants for extra-sensory powers. And some might reveal be rare, life-extending mutations that only you possess — examples of the beautiful potential of the science-in-you.

Drawing and writing about wonderment and beauty is my cunning plan to spark curiosity. I want to nudge you to understand the science of your beautiful genome. Experience the wonder of your inner biology. It’s what Angela Wistrcill and I talk about on her “Awake to Wonder” podcast.

Hey artist, why genomics? It’s a proper hero’s adventure that mesmerizes philosophers, poets, musicians, and visual artists like me. Pictures and a story can capture the wonder, but I want to do more than captivate. I want you to become a genome-smart advocate-for-science.

Science is under attack. We all need to support basic and translational research, genome engineering, synthetic biology — innovative drivers of the Genomic Revolution. Now that we can engineer life, we need science-savvy citizens to guide ethical and inclusive policies. Future generations are counting on us to get it right.

Genomic science will change us; it changed me. I morphed into a genome explorer and fierce advocate for science. I’ve been exploring the science of our magnificent genomes with art and story ever since. Check out “The spark for the art” (below) for the backstory of my path to an artist for genomics.

The spark for the art.

Did you know that we’re the first generation to participate in building a new domain of science? Who wouldn’t want to be part of it? “Me! I want in!” I went looking and found one of the first genetic ancestry tests for non-scientists.

Using the swab, sending my sample, and receiving the report about my deep ancestry was a fascinating process. What ancient stories would my modern DNA reveal?

That was 2005 and little did I know, I was participating in the Genomics Revolution. An audacious experiment that grew into a human-planet-wide adventure that impacts all of us.

Once upon a time, no code, just pieces. For more than 150 years, paleo-anthropologists examined ancient remains to decipher the puzzle of human evolution. Human fossils are rare; scattered across continents in small fragments, scientists feared there would never be enough to assemble an accurate history of our species.

Rise of a new era. Then in 1977, genetic sequencing technology added pieces to the puzzle. Invented by British biochemist Fred Sanger, the tech “reads” the A, T, C, and Gs on our chromosomes and mitochondria. Geneticists began to build a library of human genetic variation — an audacious experiment that became the Human Genome Project (HGP), thus kicking off the Era of Genomics.

Bones and genes get together. While HGP research focused on basic science and biomedical questions, anthropologists wondered if ancient DNA could answer questions that fossil bones could not — how did we evolve; where do we come from?

A 1987 scientific paper proved that it could. “Mitochondrial DNA (mtDNA) and human evolution” was the first to analyze patterns in DNA to understand our early evolutionary history. Considered a classic, Stoneking, Caan, and Wilson wrote a short and easy-to-read paper; check it out.

Mark Stoneking and colleagues compared mtDNA from people who were alive and living in different parts of the world. They concluded that all humans had a common ancestor in Africa about 200,000 years ago. Their work and research by other scientists launched the field of molecular anthropology.

Next step: genomics + paleo-anthropology. What if DNA in old bones could be retrieved, sequenced, and compared to people living today? What stories they could tell! That’s what evolutionary geneticist Svante Paabo accomplished by developing methods to extract ancient Y chromosome and mtDNA from paleontological remains.

You can read about the scientific adventure in his autobiography, “Neanderthal Man: in Search of Lost Genomes.” Investigating ancient DNA and modern genomes is the field of molecular paleo-anthropology. The mighty combo of genes and old bones continues to build a deeper understanding of our species.

Hello DTC testing. I was mesmerized by the unfolding discoveries and wondered if someday, somehow, I could be part of it. That’s why a curious venture, The Genographic Project, caught my attention. It was a unique collaboration between science and commerce — one of the first to offer direct-to-consumer (DTC) genetic ancestry testing.

Building a new domain. In addition to sequencing populations for scientific research, they offered DNA kits to individuals. Not only would my data add to the knowledge of our species, but the project would give a report about my own “deep” ancestry. I could participate in scientific discovery by adding my bits to the new domain of science.

Catching the spark. It was the summer of 2005, and I ordered a Genographic DNA kit straight away. Weeks later, my results arrived. The written report describing my Northern European heritage was no surprise, for it synched with my family history. The graphic description, on the other hand, was simply astonishing.

Powerful story. A map of the world showed lines coming out of Africa, looping through the Levant, with a few turning northward through Europe. One line ended close to the British Isles and was labeled “haplogroup H.”

The lines depicted my maternal lineage via “markers” in my DNA. The markers are unique mutations in my mitochondrial DNA passed from mother to daughter through distant times. An ancient female story about women I would never know, yet connected by shared genetic variants I carry with me today.

Powerful visual. This picture of shared genetic ancestry was something we had never seen before. It was powerful new information that was personal yet human-wide. It showed, in less than a thousand words, that we’re all connected. How could I communicate my feeling of wonder and awe?

I dove into drawing and writing about genetic ancestry, weaving what I learned into my creative process. I wanted to show and tell our genome stories. The outcome from hundreds of sketches and many hours of research was a series of DNA portraits.

Visualizing genetic ancestry. Shown below is a self-portrait showing my maternal lineage, haplogroup “H” from mitochondrial DNA. As I developed the look and feel of the portraits, the work grew into a series that included a person’s face. You can see some of the portraits in the Genetic Ancestry Exhibit the University of Minnesota commissioned. 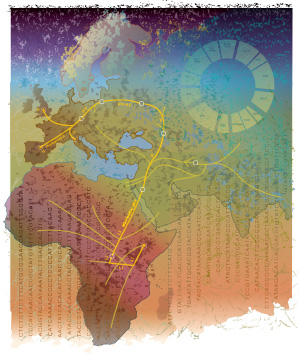 More than a picture. If you clicked and looked, you noticed that each portrait has a companion storyboard. It was an experiment to inspire and inform. I wondered, could art and story explain complex scientific concepts? Would the pairing elicit the same sense of wonder I felt when learning about my genome story?

The reaction of viewers at the exhibit was pretty cool. I watched as they studied a portrait. Then read the storyboard alongside it. Then look again at the artwork. Animated conversations grew all around. I even overheard someone say, “ah-ha, I get it!”

Since then, I’ve experimented with new ways to pair art, story, and genomics. Animations that explained complex concepts were one approach; Ted-style talks with illustrated images were another. My current project is an interactive digital book about our Genome Stories. 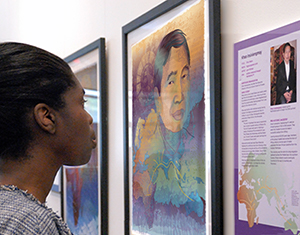 A visitor to the Genetic Ancestry Exhibit viewing one of the DNA portraits and companion storyboard of a man from Laos.

The Genomics Era. When diving into the thick of it years ago, I couldn’t imagine I would morph into a genome explorer and fierce advocate for science. And how the Human Genome Project would impact everyday life. What began three decades ago as an audacious experiment laid the foundation for gene therapies for precision medicine and rescued millions of us with the mRNA vaccines.

We’re all Genome Explorers. As genomic applications integrate into everyday life, understanding our data becomes vital to our individual and human-wide health. We need to be genome-literate to guide ethical applications and just public policy. Future generations are counting on us to get it right.

It’s why, some years ago, I went on a mission to show the beauty and value of our magnificent genomes. We’re all Genome Explorers now, and that’s why I plan to stay in the thick of it.