DNA portraits are genetic ancestry paintings showing an individual’s face with their ancestors’ migration paths across continents and deep time. 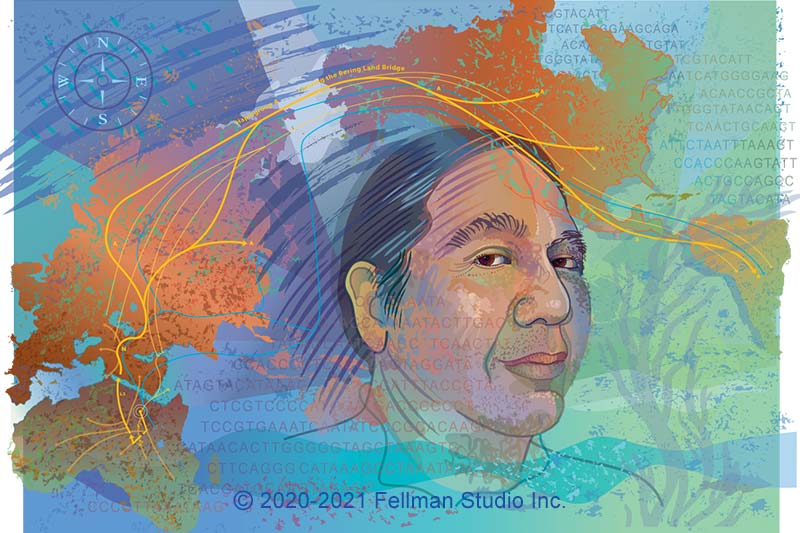 This portrait and the other genetic ancestry DNA portraits shown below were commissioned by the University of Minnesota for a research center.  It shows my signature style — a person’s face on a map with their ancestors’ migration paths from deep time. This group for the center is the culmination of work created over a six-year period that included dozens of DNA-based portraits.

Are you curious about the backstory? Scroll down the page for the inspiration and artistic vision, creative and collaborative process, and the source and explanation of the scientific data in my genetic ancestry portraits.

“Crossing Beringia,” shown above, is a portrait of Ron, a Native American man from the Ojibwe tribe from the Northern Midwest. It includes haplogroup data from his mitochondrial DNA and Y chromosome. Follow the paths of his maternal (yellow) and paternal (blue) ancestors as they leave Africa and head north to Siberia. And then cross the submerged continent Beringia to the Americas — a journey of thousands of miles made over ten thousand-plus years.

Ron’s paternal haplogroup, M3, is the most widespread male lineage in the Americas. Nearly all Native American men are descended from this line. His female line, haplogroup A, is a deep and diverse lineage and may have arrived in the Americas 15,000 to 20,000 years ago.

Khao is an American originally from Laos. His portrait, “First Wave,” shows his maternal migration path, haplogroup M. They may have been the first modern humans to make a successful exodus from Africa. Members of his group headed east across the narrow span of water that separates East Africa from the Arabian Peninsula.

It was the start of a long migration eastward, across the Middle East to Southern Eurasia — close to Khao’s birth home in Laos. You can see that the lineage branches with some of his ancestors continuing to settle Australia and Polynesia. 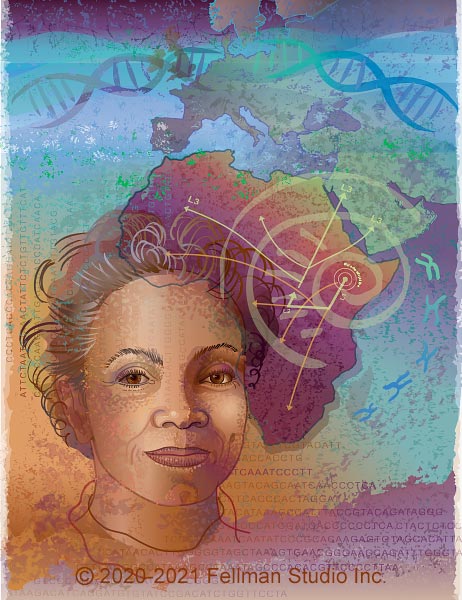 “Spiral Journey” is a portrait of Judy, an African American woman. It traces the paths of the L3 group, a lineage that arose in Africa about 80,000 years ago. They were a group of modern humans leading the out-of-Africa migrations.

Judy’s ancestors were members of a group that decided to remain in Africa — traveling west and north, spiraling around the continent’s top half. Descendants in Western Africa formed the lineage found today in many African Americans — often due to the transatlantic slave trade. Judy’s “L3e” haplogroup is also common among Afro-Brazilians and Caribbeans. 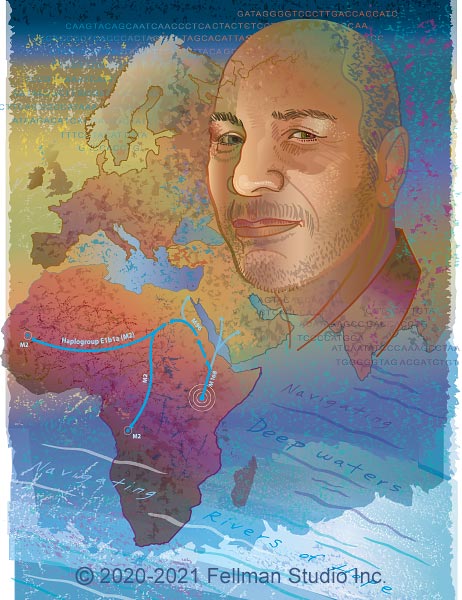 The first genetic marker in Wayne’s lineage is “M168”. The marker locates the beginning of the migration route close to present-day Ethiopia, Kenya, or Tanzania in the Rift Valley region. Scientists give an approximate date of the emergence of this marker at 31,000 to 79,000 years ago.

It was the bones of dead people that gave me a lifelong passion for paleoanthropology. The discovery of fossils from the Great Rift Valley that hinted at our ancient beginnings. And how the marvelous paintings in National Geographic Magazine brought life to the fossil bits from pre-historic humans. I was a kid and mesmerized. But skeptical. (1)

Finding the wonder. I wanted the true story, not an interpretation derived from fragments. Where did we come from, and how did we evolve, I wondered. What makes us human? There was still so much to know, and would we know it during my lifetime? Then decades later, a breakthrough from biology and technology changed everything. And media caught the excitement when headlines in 72-point bold type yelled, ”Scientists sequence the human genome!” (2).

Pieces coming together. That was 2000, and geneticists were working furiously with the new tech to understand human genetic variation. Anthropologists were busy scrutinizing genomes from people alive today to trace ancient lineages. And a few molecular anthropologists were extracting real, old DNA from fossil bones. Could the new methods bring the fragmented pieces of human evolutionary history together? (3)

Genomics is 21st Century science. It wasn’t an easy collaboration at first — an established field accepting data from a new area of inquiry. Especially since the combined approach elevated genomics as the pre-eminent science of the 21st century, yet, it was a mighty combo. Looking at the morphology of ancient bones and the molecular world inside them began to reveal aspects of human history, we thought forever unknowable. (4)

If you don’t usually do footnotes, take a minute to check out mine. For more of what I really think. And, of course, links to intriguing books, papers, podcasts, and famous people.

Science for all of us. We were watching a new era unfold. Who wouldn’t want to be a part of it? Would they sequence everyone’s DNA? I wondered if someway, somehow, they would sequence mine. An opportunity appeared in 2005 from the Genographic Project. It was an innovative collaboration between science and commerce. Led by geneticist-anthropologist Dr. Spencer Wells, the scientific project offered DNA sequencing to individuals. (5)

Participating in scientific discovery. I bought a kit, swabbed away, and four weeks later, my test results came back. I’m a Haplogroup H1, typical for my Swedish-German-Northern European background. No surprise, but I was elated! My results included a graphical display of my Haplogroup as a path on the world map. It traced my lineage back through time to Africa — a striking visualization of our place of origin. And how we are all connected! But something else gave me a thrill — a partnership with scientific discovery. (6)

Hello, consumer genetic testing. The Genographic Project was one of the first to introduce direct-to-consumer DNA testing. Not only would we get insights into our “deep” ancestry, but contribute to scientific research as well. It also set the model for something critical for advancing scientific discovery — a partnership with ordinary, healthy, and curious people. (7)

Don’t miss the good stuff in the footnotes at the end of this article for links to sources, scientific papers, podcasts, and my comments on all of it.